More : Photos and videos of progess with this work are here

Apparitions’ are a series of artworks experienced as an ‘augmented reality’ when using a special application that triggers them, revealing heritage & social memory  elements lost in wars, council traffic control and storms during rapid gentrification in my hometown of Hastings, East Sussex

Ecstasis experience delivers excellence & ‘flowstate’ in an expansive art installation involving a heightened intermingling of the senses. Combining research from Parapsychological, NLP, Hypnosis, Lucid Dreaming and meditation. Wearing a SubPac speaker during a special stroboscopic programme the audience enters journey through London underground, Gongs and brainwave modulated variants are fed-back to the participant as changes in the generative sonification. Initial cognitive responses gradually receded allowing a different version of the generative non-linear narrative to unfold as brainwaves are entrained in a variety of frequencies to achieve flowstate, to step outside of yourself. 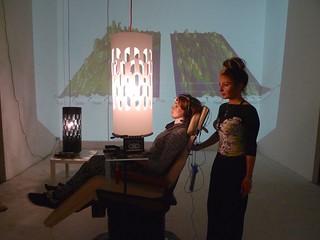 A Syncretic artwork first shown in 2014 in The Kinetica Art Fair London. In this interactive, participatory artwork the Brainwaves of participants are monitored whilst experiencing a classic kinetic sculpture spinning atop a record player known as a ‘Dream Machine’, invoking the phenomena Flicker (8-10 hz cycles) via neurofeedback. The resulting increased Hypnagogic & Hypnopompic brainwaves of Alpha and Theta are fed-back to the participant as changes in the generative sonification. Emergent sonic guides and voices recede, new ideas come to the fore, in a secluded space, eyes closed, reclined in an air-pumped Dentist chair, they float back down, where time disappeared –  experiencing Reverie, increased Theta waves. Feedback has shown increased relaxation, refreshed creativity and non linear thinking. This installation has been exhibited at many different locations –
click here and view all of these places with photos and videos

A Mixed media installation exploring dreaming, reverie and consciousness comprised of the brainwave (EEG) visualisation of a vivid dream recorded by the artist, video-mapped and projected over an oversized book accompanied by a series of ready-mades and personal architectural pen illustrations. The main piece shows a software visualisation of brainwave data with Theta waves and REM (rapid eye movement ) eye oscillations, it is a continuation of the 5 stages of sleep made by a series of domed glass cloches. Sitting atop 2 rolls of pianola paper, they protect delicate dream fragments and contain the ‘NREM’ stages 1-4 of sleep (including a 14 million year old fragment of Bohemian meteorite, Moldavite, Zincite and and Agate in two hemispheres). Surrounded by a further 15 ‘Oneirical’ fine ink illustrations in a variety of vintage frames, made from prolonged states of Reverie since 2014. The soundtrack combines generative EEG triggered sounds over a distant echoing piano played over a long evening.. never ending. (more)

This is the main piece, the final stage displaying a movie of the actual brainwaves (EEG) recorded during this dream event by the artist,  and visualised using specialist software into 3D waves. It is then data-mapped and projected onto an oversized bible mounted on a shelf onto the wall. The eye movements in REM and Theta waves in dreaming can clearly be seen.  File length : 2 minutes 45 seconds.
Here is a link to a video

Self Portrait of the artist, in Linnet Cage 2017

‘Augur & Astro’ :
a series of readymades contemplating the embodiment of Mind.

‘Theosophical Selfie’
Exploring notions of self-importance and obsolescence, from theosophical readings from The Lodge writings by Madame Blavatsky and current steganography. The Xray is almost obsolete medium encapsulating invisible information, being replaced by digital media to facilitate its primary role, however, more uses can be made from a sheet of this silver substrate containing material.

‘HighTeA’
Psychedelic & ceremonial vessels for partaking in consciousness-raising dedoctions are often decorative and kept for posterity. This group of objects begin extra tiny and assemble dangerously atop each other making a totem pole of vintage teacups. One is embellished with Gingko biloba leaves and another green vine motifs, selected following a series of dreams when this colour and plant were omnipresent.

‘The Augur’
A tiny resin model of the brain is 1/11 scale ( appropriately in keeping with sonic and EEG research the artist conducted with Brian Barritt and Flinton Chalk in 2005 ) is semi-enclosed in vintage glass presentation cases, but it too small to be human. The photos show its gradual emergence, almost appearance levitating on a rocker spring, or trapped inside a display case as it provokes enquiry about how consciousness can be embodied, protected and extended, and a value attached for all time.

More photos of all readymades here:

‘Slumber with a key’ : Sleepcycles – The Hypnagogic.

A readymade originally shown in the above-named show in 2016, inspired from Salvador Dali’s well-practised technique of having a siesta in a chair with 2 keys in hands and 2 plates below, to capture with a bang the moment the first stage of sleep occurs. This is ‘The Hypnagogic state’ – where bizarre content and surrealist quality score highly when examined within the setting of a sleep laboratory.  This piece comprises a triangular, rather daunting,  Swedish ‘monk’s chair’  (vintage 1950s) and atop it hangs a Victorian linnet cage, shaped like a hot air balloon, a floating palace to offer refuge to the fleeing dreams within its swirling wire confines. Price upon request

As a feature in ‘The Cyberdelics Incubator‘ and invited speaker we were offered space to show work in the industrial region just north of central Amsterdam. I created a portable version of The Flickering Phrontesterion within a lucid light space. Within two suitcases I packed PandoraStar strobe  lamp for intense  eyes closed, white light  ‘Digital  LSD’ sessions, a floating inflatable chair with  two Dreamaxchines spinning on record players where EEG would modulate a soundscape of field recordings collected from previous participants’ journeys described to me and fed back to each person interacting in this Hypnagogic area.
The events  photos can be viewed here

The Creation of the strobes: SPILL, UK : Performance

The Old Police cells in Ipswich provided an eerily atmospheric performance space with the”mirrored room” for identity parades, I displayed skull X-rays along with the glass and used this entry point into my 30 minutes journey. I had EEG triggered voices about views on the afterlife from tribes and other times through a PA and drew a ‘3D doodle’ mask to wear based on another X-ray attached to a Light Book. I also stood inside the bird-cage reading to myself the same book before beginning, to set the right space cognitively and attached the electrodes to my forehead using an antique vanity mirror in view of the audience. Then I set about creating my mask.
Click here for Photos on Flickr
More photos and read about the performative installation here

The Creation of the strobes: Waag, NL :

The first performance of my work inspired by the painting “The creation of the birds” (pictured) by Spanish artist Remedios Varos, exiled to Mexico in the 1950s. It affected my styling as I evoked the character from her painting, channelling otherworldly elemental and audible streams with Scientific strobe lights as my guides and masters, a slave to an EEG hidden behind the bird mask, the live sonification filled the high-dome of the Waag society chamber

Oneiricals & Revelations : 2015-2016
A series of Fine line drawings from Lucid dreams and liminal states of consciousness.
Mexico : 2012 – 2013
Drawings produced during one of several trips whilst experiencing a long distance relationship.
Form constants : Monotone paintings made during strobe lighting conditions. A series of spontaneous canvas drawings made in permanent marker pen and black ink during 8Hertz strobe light effect, the rhythm emerged where the continuity of the narrative became disturbed.

‘Luciana’s work is sharp and inquiring. She sets up performance installations whereby we (the audience) witness her (the artist) undertake elements of experiment and ritual on our behalf. But this is only half the story, as what the artist does really well is also simultaneously building overarching state changes for us to experience as transformational to our own senses. This blending of putting her own experiences at stake, in order to then facilitate our own sensory involvement, is a clever mechanism to draw together the science, philosophy and magical elements of her work, in ways that are as smart as they are generous.’
– Robert Pacitti, Artist, Director & Curator – SPILL Festival of Performance

Harold Chapman, Dreamachines in Deal, 2014-2015
Following an informal meeting with the photographer Harold Chapman and partner Clare in 2014 arranged by Bronac Ferran, I gave a demonstration with Dreamachines to Harold and friends in The MOMI and stories started to be recalled from his time with its inventor Brion Gysin in The Beat Hotel, Paris over 50 years ago. I am collecting these to add to a show I intend to hold in 2016 celebrating Reverie through this iconic kinetic light sculpture.

Arthur Brown: voice, dance and remixing PsychoSonic work, 2013-2015
Exploring EEG in realtime music composition, story telling, remixing multi-layered tracks and looking to create a new performative sound & artwork for 2016. Following a debut show in Norway and large public outing in Bestival 2015 we are learning how the public engages, and importantly believe and trust what we do is real and not weirdly choreographed!

Augmented Consciousness experiments with portable EEG, 2007 – 2015
From interviewing people on dream recall, particularly Lucid dreaming whilst monitoring their EEG in public Art, Technology and Science events, The Institute for Unnecessary Research, Flying, Night clubs, festivals and retreats. I performed sonified EEG first in 2007 during a tour in The Future of Sound led by Martyn Ware. This led to research into 111Hz sound with Flinton Chalk and Brian Barritt in 2008. See a video here of EEG session with Brian

Brain-Tunings, Singing bowls, Pineal, Preying Mantis, 2014
Sound healer Sarah Evans allowed me to record her with binaural microphones, as well as providing sonic space for our Morphology workshops in Lucid Dreaming held in Hastings between October 2013 and May 2014. I also recorded her EEG during a session of crystal bowls and will document all of that here soon.

Dreamachine: extended play to buy : a special 45 rpm laser-cut  Dreamachine cylinder template fro £55, and optional full kit includes the hexagonal multi- LED, retina friendly bulb, and  5m or 10m length candle-stick twist electrical cable that hangs really well from a cup hook in the ceiling to dangle the bulb over your record player. Posted in a tube, you provide the record player, a Dreamachine kit for sale to everyone. Buy here (international postage available on request)

I am working with brainwave monitors to explore cognitive changes in meditation, relaxation, inspiration, sleeping and dreaming. I transmit in realtime and create installations, performances and workshops that display a deeper exploration of cognitive changes. These have occurred internationally including in CENART in Mexico City, The Waag Amsterdam, iMal in Brussels, The October Gallery, Science Museum and Royal Institute in London and FACT in Liverpool. If you would like to buy an artwork, enquire or make a booking  please make contact here.

‘‘The flurry of waking activity comes and goes; the inertia of sleep comes and goes. Yet, throughout these changing values of waking and sleeping, there is a silent, unbounded continuum of awareness that is me; I am never lost to myself.’’